Swift provides us two equality operators, == and ===, which are slightly different from each other.
==  operator is used for comparing values whether they are equal. It is used for built in types such as strings, booleans, integers and doubles. For instance 4==4 is true, because 4 is equal to 4.
=== operator is used for comparing references whether they point the same instance (same memory), it is identity operator. It is available only when using classes.

And let’s create two students which references to Student class and compare them using equal (==) and identical (===) operators.

When we run below if condition we will see that they are equal.

Let’s check whether they are identical (===).

They are not identical because they reference two different instances in Heap area.

If we create another instance based on one of these instances (studentA or studentB) and compare them we will see that they are identical.

This means that they reference to the same point in the memory.

Posted by Elshad Karimov at 12:37 AM No comments:

Email ThisBlogThis!Share to TwitterShare to FacebookShare to Pinterest
Labels: Operators

Big O is the language and metric that we use to describe the efficiency of algorithms. Let’s look at the following scenario: if we want to send a file to someone as fast as possible , how should we send it?

There are two options:


The concept of asymptotic runtime or big O means time complexity. Which means we could describe the data transfer algorithm runtime as: 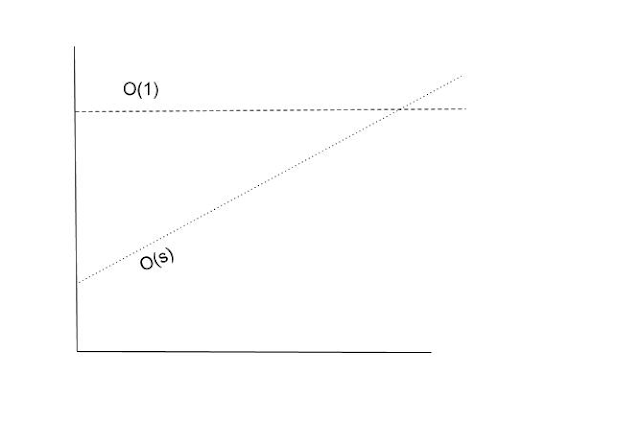 No matter how big constant is and how slow the linear is, it will surpass constant at some point.
There are many other more runtimes such as O(N), O(N2), O(2N). The time to paint fence that is w meters wide and h meters high could be described as O(wh).

We can describe our runtime for any algorithm in three different ways. Let’s look at this from the perspective of quick sort. It takes a random element as ‘pivot’ and swap values in the array before elements greater than pivot appear.


Time is not the only thing that matters in an algorithm, we might also care about the amount of memory or space that required by algorithm.  It is a parallel concept to time complexity. If we need to create an array size of n, O(n) space will be required. Stack space in recursive calls are also count.

On the other hand, there are some cases that n calls do not take O(n) space.

Due to the fact that n calls to pairSum function does not exist simultaneously on the call stack, we only need O(1) space.

It is very possible that O(N) code is faster than O(1) code for specific inputs. Big O just describes the rate of increase. So for this reason we drop constant which means that O(2N) is actually O(N).
As we can drop constants, it is possible to drop non dominant terms.
Sometimes we might have sum in the run time, for example O(B2+A) cannot be eliminated without knowledge of A or B.

Below graph depicts rate of increase for some common big O times. 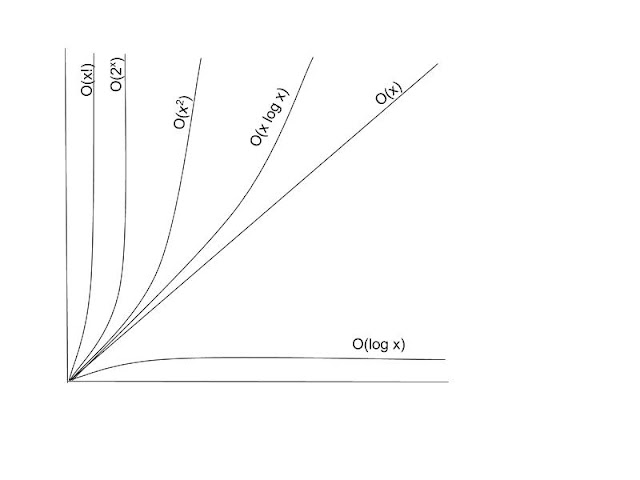 With an ArrayList or a dynamically resizing array, you wont run out of space since its capacity grows as you add elements. When the array hits the capacity, the ArrayList creates new array with double capacity and copy all elements to the new array. So if array contains N element the runtime of adding elements will take O(N) time. We know that this does not happen very often and majority of time adding will be O(1), and amortized time takes into account both cases.
As we add elements, we double the capacity when the size of array is a power of 2. The capacity becomes 1,2,4,8,16 … X. If we look at the sum of this capacities from right to left it starts with X and halves until it gets 1.
X+X/2+X/4+X/8+..+1 and this roughly 2X and if we remove constant it becomes O(X). Therefore, X adds take O(X) time and amortized time for each adding is O(1).


If we look at the binary search as an example, in which we are looking for x in an N-element sorted array. First we compare x to the midpoint, if it is equal we return , if x<middle , then we search on the left, if x>middle we search on the right.

Thus where the number of elements in the problem space gets halved each time, that will likely be a O(log N) runtime.


What is the runtime of this code?

Rather than assumptions let us look at the through the code. Suppose we have f(4) and this calls f(3) twice and each of those calls of f(3) calls f(2), until we get down to f(1).

The three will have depth N and each node has two children. Therefore each level will have twice as many calls as the one above. More generically it can be expressed as 20+21+22+23+...+2N-1. Thus, when you have recursive function that makes multiple calls , the runtime will often look like O(branchesdept) and in our case O(2N).
Posted by Elshad Karimov at 1:40 AM No comments: